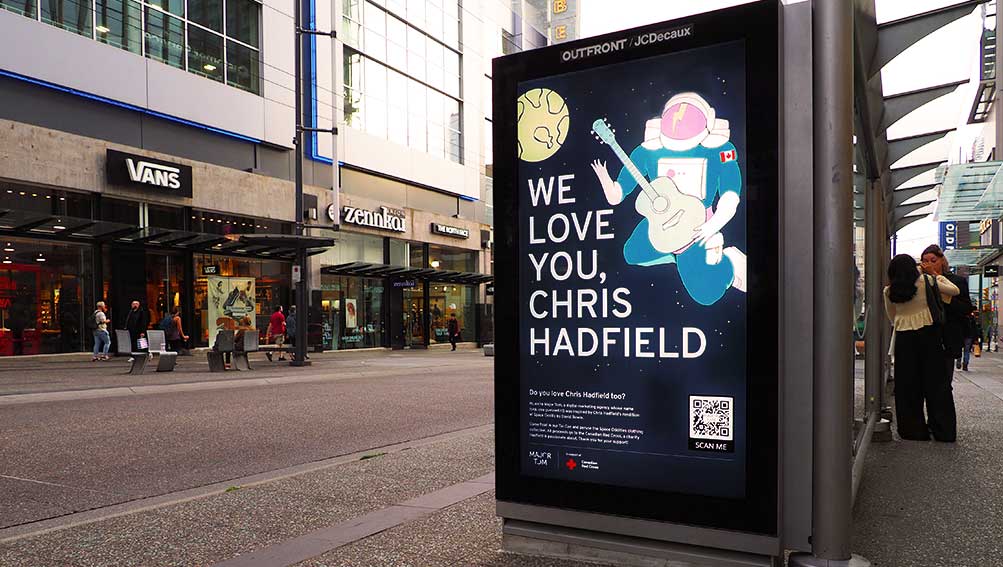 If you’re a Chris Hadfield or Vancouver Symphony Orchestra (VSO) fan, then you might have seen the Major Tom astronaut on Friday, September 16th in Vancouver. The one giving out hats outside of the VSO.

Or perhaps you saw our projection or hyper-local programmatic ads?

It was all part of our Space Oddities, an experiential marketing campaign designed to surprise, delight, and raise money for charity.

The Space Oddities Campaign: What, why, and how?

At Major Tom, we’re big on leading with a humble heart (in fact, it’s one of our values). So, we like to give credit where credit is due and show thanks to those who inspire us. Chris Hadfield — writer, musician, astronaut, veteran — is one of those people. In fact, Chris Hadfield was partly the inspiration for the name Major Tom.

So, we created an experiential marketing campaign to say thanks, create a fun time for our community, and raise money for the Canadian Red Cross. Here’s how we did it.

How we executed the Space Oddities Campaign

Experiential marketing gave our audience the chance to interact with us in ‘the real world' so we decided to take our digital efforts to the next level. We wanted to thank Chris Hadfield for being an inspiration, but more than that, we wanted to do some good in our community: spread joy and give back.

Here’s how we achieved our goals.

Tactic #1: Make sure Chris Hadfield and all of Vancouver know we’re fans

We used hyper-local programmatic ads in a 300m radius of the VSO to broadcast Chris Hadfield being in Vancouver. We leveraged dayparting to keep our messaging relevant as the event got closer. 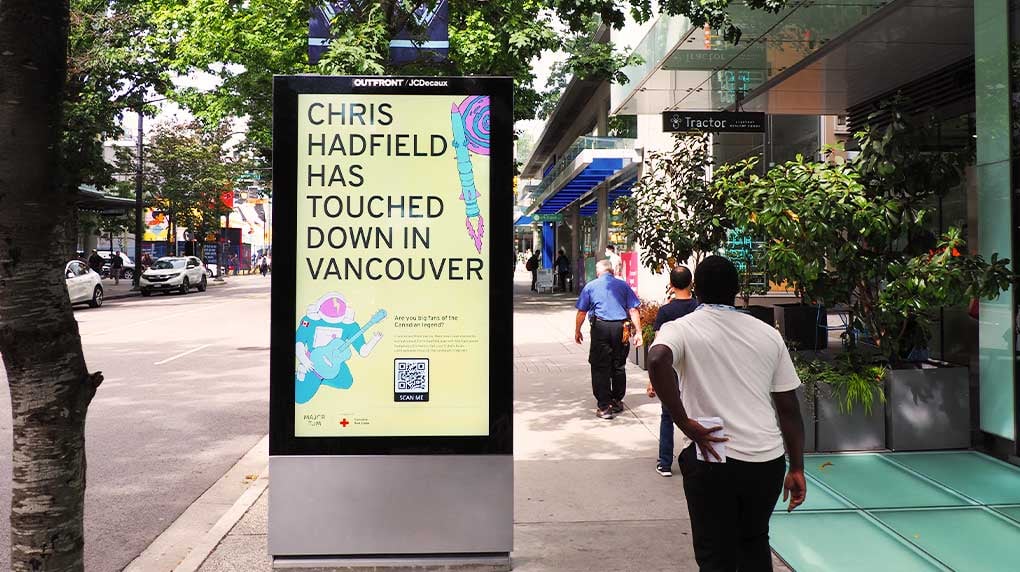 The first message announced the Canadian legend’s arrival in Vancouver and encouraged people to grab tickets to the show. A QR code directing them to the VSO’s event page was displayed loud and proud. 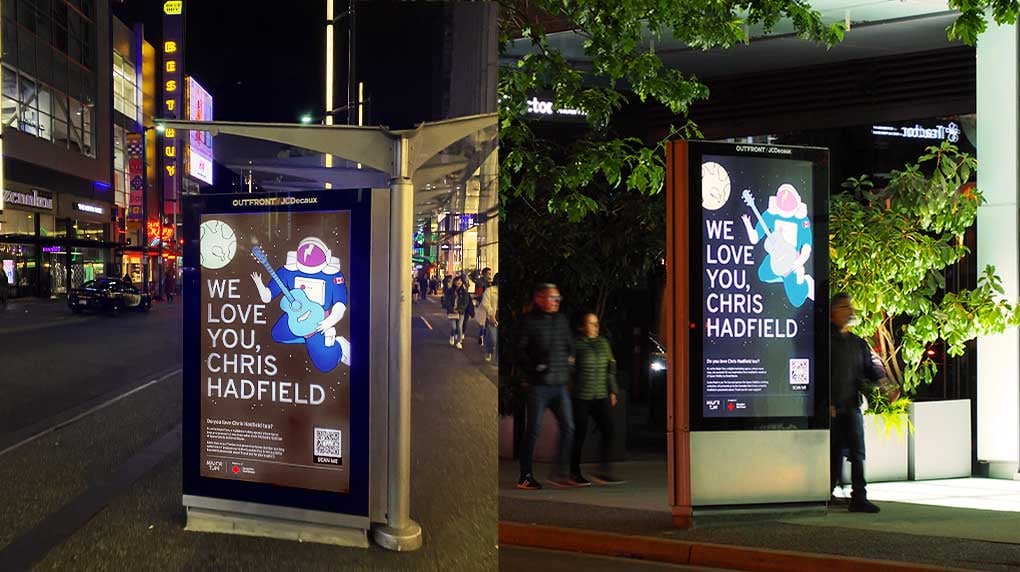 When ticket holders started arriving downtown, the ads flipped to the second message. We asked them, 'We love Chris Hadfield, do you?’ and encouraged them to donate to a charity that was near and dear to Chris Hadfield’s heart through our Tin Can store.

Tactic #2: A gift from Major Tom

Chris Hadfield and his band were given limited edition t-shirts from Major Tom along with a handwritten thank-you note. Each shirt had a different design from our new Space Oddities collection, which we created as an ode to Hadfield. His shirt, of course, has the Canadian flag on its arm.

An astronaut was on-scene when doors opened to hand out free merchandise, and direct people to the Tin Can store, where they could purchase whatever their hearts desired from the store. Why? Because all proceeds gained between September 16 and October 16 will be donated to The Canadian Red Cross, a charity Chris Hadfield supports. 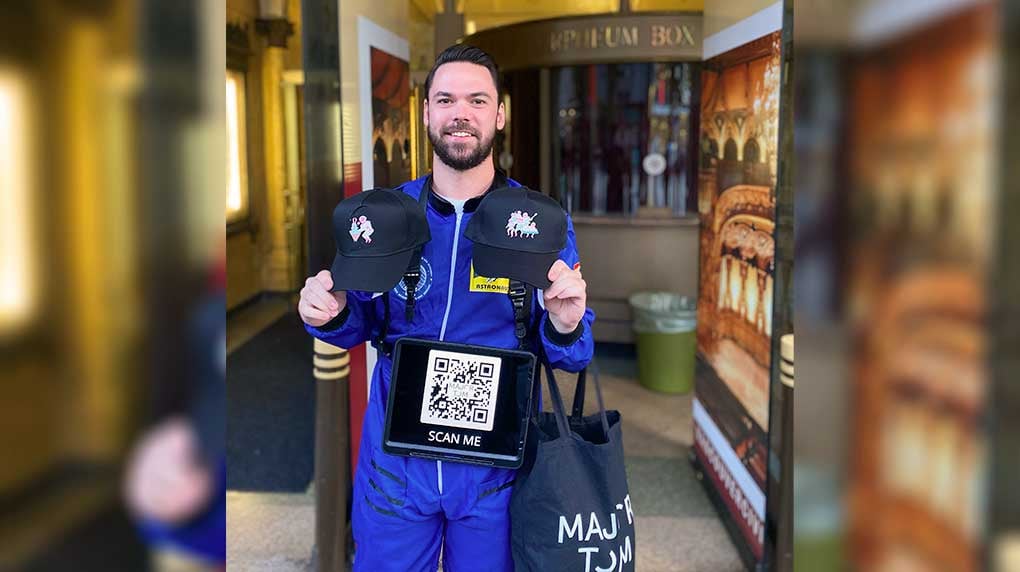 To further spread our message, we projected it onto the side of The Orpheum, home to the VSO. The projection included a QR code directing people back to the charity initiative on the Tin Can store and a brief explanation of what we were up to. Again, one message before the show and a different one when attendees came out. We're thorough like that.

The Space Oddities Campaign was a huge success. When we realized Hadfield was coming to Vancouver, where Major Tom is headquartered, we wanted to create a campaign that would spread a little joy and give thanks where thanks is due. Those were the main KPIs, and based on Chris Hadfield's lovely Tweet and the smiles of everyone who met the Major Tom astronaut, we'd say we smashed it.

If we're to look at more quantifiable KPIs, there was a 391% increase in website visitors compared to the previous month and an average order value of $71. So many thanks to everyone who purchased from the Tin Can and has helped us raise money for the Canadian Red Cross!

And for those who haven't yet, feel free to float in the Tin Can before October 16 for a charitable cause. Shopping has never felt so good!