Major Tom turns 20 and we’re going to the Moon! 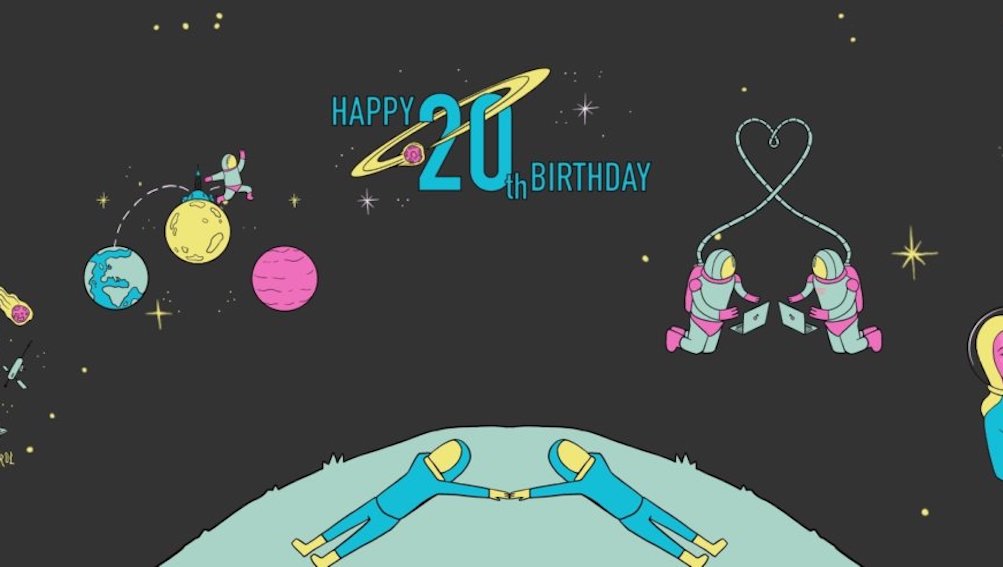 Do you remember your 20th birthday? Was it a week-long celebration, full of funny videos and good tunes? Today marks Major Tom’s 20th birthday and, as you know, now is not the time for a splashy party. Instead, we’re celebrating our 20th birthday online, giving you a fun little something (just scroll down to see!) and saying thank you to everyone who has helped us get to where we are today.

The idea: create free, fun content to celebrate our 20th!

Birthday gifts are great but this year we wanted to give you a “gif” of our own.

We stumbled across a reggae song called “Moon” by a band named Bonzai! that’s fun and uplifting — plus, it’s accompanied by a great animated music video. The entire thing resonated with us and we knew we wanted to create something with them. Collaborating with the band and the animator, we created a music video of our own.

The overall goal was to create content that nodded to our history, celebrated our birthday, and inspires you to use as you like — the vibe is experimental and fun like many 20th birthdays can be. We worked with the animator Steffen Heil in Germany to create a series of animations that could live on the Internet freely and allow others to express themselves afterward.

The results are five animations: vibrant, fun, and space-themed, all adaptable for people outside of Major Tom. They’re featured on our Instagram story and are available to use via Giphy. These have also been turned into t-shirt designs that are available for sale in our Tin Can eCommerce store.

1. Happy 20th birthday to help others celebrate their special day.

2. The first woman on the Moon (Currently planned by NASA by 2024 and we’re rooting for Astronaut Jenni)

3. Moon to Mars: celebrating the next stage in space exploration

A brief history, a humble look back, a glance at our beginning

Major Tom was started in 2000 by best friends John Blown and Chris Breikss in Chris’ Vancouver apartment. Back then, we were called 6S Marketing. We grew to a staff of over 55 over time, adding offices in Toronto and New York, and working with incredible clients over the years — many we’re still proud to call partners today. In 2018, we did what any 18-year-old would do, and changed our look, rebranding as Major Tom.

It’s mind-bending to reflect on the digital agency’s past 20 years and to think about where we’re collectively going in the next 20. The world is rapidly evolving — but we’ve always been adept with change.

You’ll see a space theme winding through the undertones of our brand. Our name is, of course, inspired by the character “Major Tom” from David Bowie’s song Space Oddity. The song was released in 1969 — the year that man took his first steps on the moon.

In 2019, NASA announced the ambitious plan to return to the moon by 2024 and to set up a base for future Mars exploration. It’s an admirable goal, one they’re still working toward despite the state of the world. And, we aim to follow suit. Despite the uncertainty of 2020, Major Tom is evolving and thriving — we’ve got our own ambitious plans to shoot for the moon (metaphorically speaking, of course).

Whatever your own ambitions plans are, we’re right there behind you.

Since launching these GIFs, we continue to add new ones to our GIPHY account that covers all of the key annual celebrations. So remember to check them out and here’s one of our latest for you to enjoy!

A Love Letter to Chris Hadfield